Kenneth E. Hagin was born on Aug. 20, 1917, in McKinney, Texas. Kenneth Hagin was sickly as a child, suffering from a deformed heart and an incurable blood disease. He was not expected to live and became bedfast at age 15. In April 1933 during a dramatic conversion experience, he reported dying three times in 10 minutes, each time seeing the horrors of hell and then returning to life.

In August 1934, Kenneth Hagin was miraculously healed, raised off a deathbed by the power of God and the revelation of faith in God’s Word. Jesus appeared to Kenneth Hagin eight times over the next several years in visions that changed the course of his ministry. In 1967, he began a regular radio broadcast that continues today as Rhema for Today.

In 1968, Kenneth Hagin published the first issues of The Word of Faith magazine, which now has a monthly circulation of more than 300,000. The publishing outreach he founded, Faith Library Publications, has circulated worldwide more than 65 million copies of books by Rev. Hagin, Rev. Kenneth E. Hagin, and several other authors. Faith Library Publications also has produced more than 9 million audio teaching CDs as a result of the ministry of Kenneth Hagin.

Praying for the Precious Fruit of the Earth CD
$9.00
Add To Cart 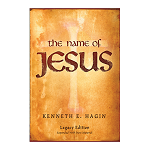